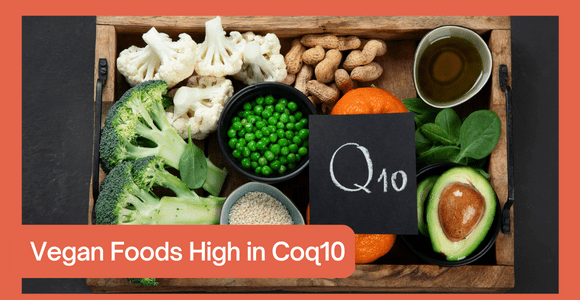 CoQ10, also known as ubiquinone or Coenzyme Q10, is a naturally occurring compound that plays an essential part in the production of energy at the cellular level. It can be found inside mitochondria – cells’ powerhouses – and has a key role in creating adenosine triphosphate (ATP), otherwise known as our body’s primary source of energy.

CoQ10 is an incredible antioxidant that shields the body’s cells from harmful free radicals. Not only does it protect against these molecules, but CoQ10 also helps neutralize them so they can’t cause any more devastation. Besides its role in energy production and as a powerful antioxidant, research has proven that CoQ10 may have many other benefits such as aiding heart healthiness, encouraging fertility, and reducing signs of aging on the skin too!

CoQ10 concentrations in our bodies deplete as we grow older, and can be further weakened by medical issues like heart disease or the use of specific drugs such as statins. This decrease in CoQ10 levels has the potential to result in a drop in energy production and an uptick in oxidative stress – this is where supplementation with CoQ10 may come into play for certain individuals.

Importance of CoQ10 in the human body

CoQ10 is an integral part of the human body, offering numerous benefits that cannot be ignored.

Here are some of its main functions and benefits:

These are just some of the important functions and benefits of CoQ10 in the human body, and research is ongoing to further understand its potential effects and possible uses. It’s important to note that more research is needed to confirm these benefits, but CoQ10 has been shown to be safe and effective in many studies. 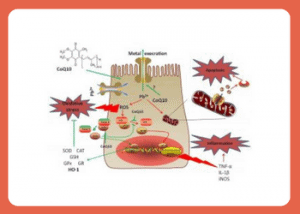 It is difficult to obtain adequate amounts of CoQ10 through diet alone as it can only be found in small concentrations within certain foods. Fortunately, there are plenty of delicious sources from which you can reap the benefits: fatty fish such as salmon and sardines, organ meats like liver and heart, peanuts, spinach, broccoli, and whole grains all contain abundant levels of CoQ10! Despite a healthy diet full of CoQ10-rich foods, it can be difficult to obtain optimal levels of this essential nutrient.

The quantity of CoQ10 in food items can range from one to the other, and be impacted by how it is cooked or processed. Sadly, some cooking methods such as grilling, boiling, and frying may diminish its presence. Furthermore, many foods that contain high levels of this compound are also loaded with cholesterol and saturated fat, which might not be a good choice for certain individuals. Plant-based sources do not offer an equivalent amount compared to animal-based ones meaning vegetarians/vegans have more difficulty consuming adequate amounts.

Despite these restrictions, many choose to take CoQ10 supplements as a way of reaching maximum levels. These can come in capsules, tablets, and creams: the best option for you should be discussed with your healthcare provider or dietitian though to guarantee dose accuracy.

The Importance of CoQ10 for Vegans 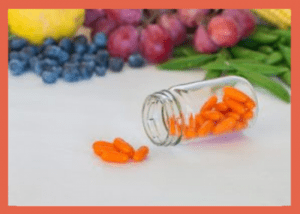 Vegans and vegetarians are at a higher risk of CoQ10 deficiency because they don’t consume animal-based products, which are typically the most concentrated source of CoQ10, such as organ meats (heart, liver), and fatty fish (salmon, sardines, mackerel). Some vegan and vegetarian-friendly sources of CoQ10 include spinach, broccoli, nuts, and whole grains, but the quantity of these plant-based sources is not as high as animal-based sources.

CoQ10 deficiency can lead to lower energy levels, poor heart health, and a weakened immune system. Vegans and vegetarians may also be at a higher risk of developing certain chronic diseases such as cancer, diabetes, and heart disease, which is why it’s important to consume enough CoQ10.

Vegan and vegetarian-friendly CoQ10 supplements, such as those made from fermented yeast, are available and can be a great way for vegans and vegetarians to ensure they are getting enough of this essential nutrient. However, it is important to consult with a healthcare professional or registered dietitian to determine the best option for you and to ensure proper dosage.

Getting enough CoQ10 on a vegan diet can be a challenge for several reasons. As mentioned earlier, the main dietary sources of CoQ10 are animal-based, including fatty fish and organ meats, which are not typically consumed by vegans. While some plant-based foods, such as spinach, broccoli, nuts, and whole grains, also contain small amounts of CoQ10, the quantity in these foods is not as high as in animal-based sources.

Another challenge is that CoQ10 can be sensitive to cooking methods, meaning that it can be lost during the preparation and processing of foods. For example, frying, grilling, and boiling can cause a significant loss of CoQ10, meaning that even if a vegan diet includes foods that contain CoQ10, they may not be getting enough of it due to how it is being prepared.

Furthermore, some vegan and vegetarian-friendly sources of CoQ10 may also be high in cholesterol and saturated fat, which can be a concern for some people.

As a result of these challenges, vegans may need to take CoQ10 supplements to reach optimal levels. However, it is essential to note that these supplement sources may not be animal-free. It’s important for vegans to consult with a healthcare professional or registered dietitian to determine the best option for them and to ensure proper dosage.

The potential health implications of low CoQ10 levels for vegans

Low levels of CoQ10 in the body can have a variety of potential health implications, particularly for vegans. Since CoQ10 is an important antioxidant and plays a vital role in energy production in the cells, a deficiency in CoQ10 can lead to a number of health problems.

Some of the potential health implications of low CoQ10 levels for vegans include:

It’s important for vegans to be aware of the potential health implications of low CoQ10 levels and to work with a healthcare professional or registered dietitian to determine the best way to ensure optimal CoQ10 levels, whether through diet or supplements.

The importance of CoQ10 for vegans especially for vegans who practice sports or high-intensity exercises. 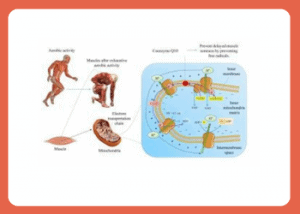 During high-intensity exercises, the body’s demand for energy increases, and the cell’s mitochondria (the powerhouses of the cells) work harder to produce that energy. CoQ10 is an essential component in the process of energy production in the cells, as it acts as an electron carrier in the energy-producing reactions within the mitochondria.

Low CoQ10 levels in the body may result in decreased energy production and may lead to fatigue and muscle pain, which can negatively impact sports performance.

Additionally, high-intensity exercises also create a lot of free radicals in the body, which can lead to oxidative stress, which can be damaging to cells. CoQ10 acts as an antioxidant and helps to reduce the damage caused by these free radicals.

Therefore, vegans who practice sports or engage in high-intensity exercises are at risk of a CoQ10 deficiency and might consider taking CoQ10 supplements, however, it is important to consult with a healthcare professional or registered dietitian to determine the best option for them and to ensure proper dosage.

While the main dietary sources of CoQ10 are animal-based, there are some plant-based foods that can provide a moderate amount of this important nutrient. Here are some examples of vegan foods high in CoQ10:

Notably, the cooking methods used can have a substantial effect on how much CoQ10 you obtain from these food items. Boiling, frying, and grilling can cause dramatic reductions in CoQ10 content, so it’s advisable to consume such foods in their natural state or steamed. Furthermore, as vegan sources of CoQ10 may be rich in cholesterol and saturated fat that could possibly raise concerns for some people – extra caution is encouraged when consuming them.

Additionally, the CoQ10 concentrations found in these vegan sources may not be able to meet optimal levels for some individuals. Consequently, dietary supplementation of this nutrient might become necessary. It is recommended that you first seek advice from a qualified healthcare professional or registered dietitian before beginning any supplement regimen and establishing proper dosage requirements.

How to Incorporate CoQ10-rich Foods into a Vegan Diet

Incorporating CoQ10-rich foods into a vegan diet can be easy and delicious. Here are a few tips to help you add more CoQ10 to your vegan diet:

To ensure that you receive all the CoQ10 your body needs, even while following a vegan diet, incorporate these foods into your meals. But always talk to your healthcare provider or registered dietitian before taking any supplements – they will help determine what dosage is right for you and advise on other nutritional concerns. Of course, it’s essential to remember that a healthy and balanced eating plan should include an array of vitamins and nutrients from various sources.

Suggestions for adding CoQ10-rich foods to meals and snacks 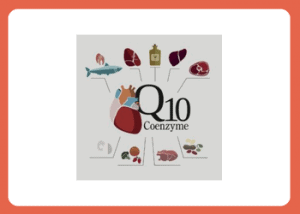 Here are some suggestions for adding CoQ10-rich foods to meals and snacks:

By incorporating CoQ10-rich foods into your meals and snacks in these ways, you can help ensure that you’re getting enough CoQ10 while still enjoying delicious and satisfying foods.

Here are some recipe ideas for CoQ10-rich vegan dishes:

Spinach and Mushroom Quinoa: Cook quinoa according to package instructions, sauté sliced mushrooms and garlic until tender, then add a handful of spinach and stir until wilted. Mix everything together, season with salt and pepper, and top with a sprinkle of pumpkin and sesame seeds.

These recipes offer a variety of delicious and easy ways to incorporate CoQ10-rich foods into your vegan diet, and you can also adjust them to your preference and dietary restriction.

Recap of the importance of CoQ10 for vegans

Vegans should pay extra attention to their Coenzyme Q10 (CoQ10) intake, as this vital antioxidant is mainly derived from animal-based foods. Not only does CoQ10 aid with energy production in the body, but it also offers multiple health advantages such as promoting cardiovascular and skin well-being. 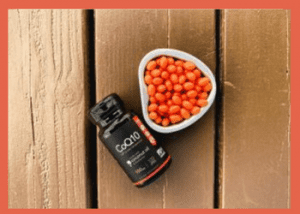 Consequently, vegans may find they lack sufficient amounts of this essential nutrient within their diets alone; thus making supplementing with a quality source of CoQ10 inevitable for optimal health benefits.

These foods are high in CoQ10 and make a great addition to a vegan diet. Incorporating CoQ10-rich foods into meals and snacks such as using spinach and broccoli in salads, soups, stir-fries, pasta, or grain bowls, or adding nuts and seeds as garnishes or ingredients in recipes can help ensure that you’re getting enough of this important nutrient. You may also get a good amount of other nutrients this way.

Vegans, especially those who practice sports or high-intensity exercises, need to pay extra attention to their CoQ10 levels, as CoQ10 can be beneficial for energy production, endurance, and muscle recovery. It is also essential for those who are pregnant or plan to be, as studies have shown that CoQ10 supplementation may improve fertility.

Additionally, CoQ10 supplements are also available, but before taking it is important to talk to a healthcare professional about the right dosage and safety for you.

Summary of the top vegan foods high in CoQ10

CoQ10, also known as Coenzyme Q10, is an essential nutrient that plays a vital role in the human body. It is particularly important for vegans, as most dietary sources of CoQ10 are animal-based. However, there are several vegan-friendly foods that are high in CoQ10 and can help vegans meet their daily needs.

Some of the top vegan foods high in CoQ10 include:

These foods are not only high in CoQ10 but also are good sources of other important nutrients and can be incorporated in different ways in your diet to get a good balance.